Ten years ago—I can’t believe it’s been that long—I was big into photo manipulation and the creation of what I called “Digital Constructions”.  I made a deck of cards depicting a series of animal archetypes. This card, the Raven, was a manipulation of a photo of a raven I took in a park   Unfortunately, I cannot find the original photograph.

I am not making any new year’s resolutions regarding my creative endeavors.  I figure that instead of vowing to do something creative every day and then beating myself up for not doing it, I will just do something–  today.   I suppose that is a new beginning of a sort.  I went out with my camera yesterday and took over eighty photos of all kinds of subjects.   From them I gleaned these images which I manipulated into black and white compositions.  I’ll see what tomorrow brings— tomorrow. 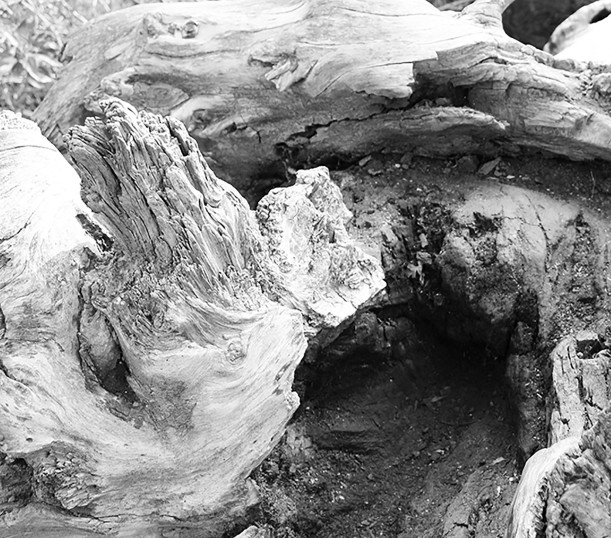 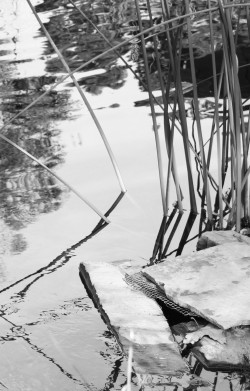 Reeds in a Pond 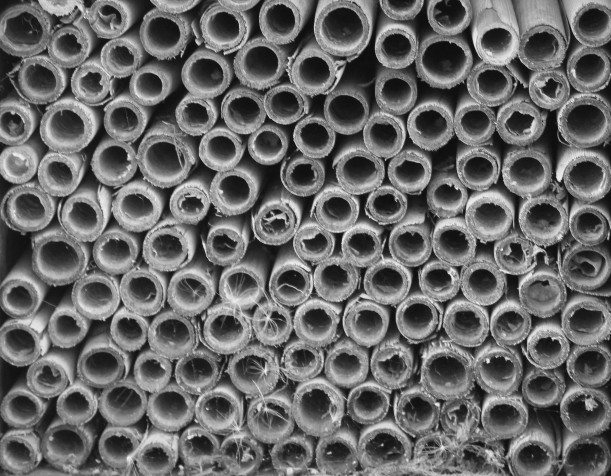 A little daily meditation is good for the body, mind, and emotions.

Once upon a time there was a woman, a beautiful woman, filled with life and vigor.  She sat for a sculptor who tried to copy her in marble with his chisels. Unfortunately, the sculpture was just a manipulation of her true image.   The sculptor could not capture her essence.    A few thousand years later, a photographer took a picture of the sculpture which became yet another manipulation of the true woman.  Finally, today a bored computer nerd decided she wanted to mess around with Photoshop to pixelize the photo and manipulate the poor woman once again.   And on it goes.  Who knows what someone might do with this image?

The same is true for the woman.  She still exists somewhere in time and space.   Well, maybe not the flesh-and-blood woman, but the ideal of that woman, the perfect form of Woman.

The ancient Greek philosopher Plato called this the Theory of Forms.  He postulated that  there is a spiritual realm that contains the blueprints of everything manifested in the physical realm. That vase, that music, that cat, those people, that government, that social relationship—everything— has a perfect and pure template in that realm.  The world of forms“…is a philosophical theory, concept, or world-view … that the physical world is not as real or true as timeless, absolute, unchangeable ideas. According to this theory, ideas in this sense, often capitalized and translated as ‘Ideas’ or ‘Forms’, are the non-physical essences of all things, of which objects and matter in the physical world are merely imitations.” (Wikipedia)

Do scholars and philosophers still believe this explanation of how the universe turns?  Not so much anymore.   This classical worldview was one of the underpinnings of western civilization for centuries,  at least that was what the Jesuits taught us in Philosophy 101.

So I sat down to screw around on a computer and make a pretty picture, and I ended up visiting with Plato one more time and letting him bend my mind.

If you would like to view a short, expedient explanation of this bit of Platonic philosophy and a very practical application of it, take a look here:

Many, MANY, years ago, I took an astronomy class in college. I had the opportunity then to attach my dad’s 35mm SLR Canon to a reflecting telescope with a tracking motor. I was able to snap a few shots of this half moon. Though I don’t recall doing it, it appears that I manipulated this particular image at some point after I learned Photoshop since the background and overall color the image seem enhanced (from black to indigo). The star field may have been helped along a bit by Adobe, but the moon photo is all mine.

“Silhouette”: Somewhere in the San Bernardino Mountains sometime in the 1980’s or so. Shot by a 35 mm SLR. Darn, those were good cameras back then.

Forlorn, or how I feel on a dreary, rainy Monday morning.

As a creative, I like to repackage reality and present it in new and hopefully interesting ways.  I do this mostly with words, but sometimes I do it with image.   Here is a photo of some crystals hanging from my car’s rear-view mirror, slightly enhanced with Photoshop to make it a little more “more,” if you get my meaning.

The first short story I ever posted for public consumption came about when I took a turn down a rabbit hole at the Soul Food Cafe.  The story was the response to a prompt about overcoming writing blocks.  In my story I have a close encounter with my vexing inner critic (long-since  banished) in a virtual and fantastical writer’s retreat called Riversleigh Manor. Here is a repost of that story.

My room in Riversleigh Manor is comfortable. It has hardwood floors and a bright berber carpet, recessed bookshelves filled with all my favorite history and art books, fine literature, and religious and philosophical treatises of all sorts. A map of Riversleigh hangs on wall, and I am delighted to discover all the cozy places I could hole up and work. Though the room is furnished with only the most basic pieces—bed, writing table, reading chair, and chest of drawers—there is one item that seems out of place. On the wall over the chest of drawers, hangs a large silver framed mirror with inlaid amber around the glass. Its luxury contrasts the utility of the rest of the room.

I unpacked my sparse belongings—a change of clothes, a few special books, some toiletries, my writing and art supplies. I slid open the French doors and stepped out onto the balcony. I gazed at the valley below and saw the River ribbon its way towards the sea. In the distance I could see the mouth of the River, a vast delta spreading out like a large green lotus, spilling into the Bay.

As I leaned on the railing and tried to compose a poem in my head about the River, I heard a banging sound from my room. I rushed back in and saw the mirror over the chest rising and falling against the wall. As I grabbed the mirror to keep it from shattering, a glow emanated from it, filling the room with a orange-yellow light. I had been warned that Riversleigh was a place of unusual happenings so I wasn’t afraid or even surprised.

Holding the mirror firmly in place, I looked into it and saw it filling with a wall of fire. The flames writhed and shimmered but cast no heat. In the depths of the flames, I could see a dark speck grow larger and rush towards me. It grew into the figure of a woman. Just as the figure filled the entire mirror, a large pop sounded and I released the mirror and fell back on my bed, covering my eyes against a bright blast of light.

Silence enveloped the room and after a moment, I opened my eyes.  “Oh, no, not YOU!”

“What are YOU doing here?”

“What? Can’t a friend drop by and say hello?”

“Yeah, right, like WE’RE friends,” I said as I pulled myself off the bed. Standing in front of the mirror was Arvilla. Tall, platinum blonde and gorgeous, she was dressed in a pin-striped business suit, pearls, and stiletto heels.

“That’s a different look. And what’s with the flaming entrance? That’s over-the-top, even for you!”

“What can I say, Sugar, it’s the twenty-first century and I’ve got to keep with the program.”

“Like I care. You didn’t answer my question—what are you doing here?”

“I heard you were taking a little vacation and I just wanted to stop by to see if I could be of some assistance.” Arvilla strolled across the room, grimacing at the furniture. She plopped herself on the chair and put her feet on my writing desk. She picked up my journal and began thumbing through it.

“I most certainly do NOT need anything from you.” I started picking up my clothes that had fallen to the floor.

“You only brought one set of clothes and no underwear—now that’s rustic, darlin’.”

She was right. How could I have forgotten underwear? “Um, I’ll pick some up at the Gypsy Camp. They have everything anyone would want.”

“Oh, yes, Gypsy underwear. How Bohemian of you. Dressing the part of a writer? You might as well, honey, because that’s as close to being a writer as you’ll ever be.”

She opened my journal.  “Oh, looky here…..’I strive to transform reality through my words and images.’” Now, ain’t that a hoot and a holler.”

I rushed over to the table and grabbed the journal out of her hands. “Arvilla, get out! I came ten thousand miles to get away from you. You are NOT going to spoil this for me.”

There was a knock on the door. Glaring at Arvilla, I stomped to the door and yanked it open. Standing there was the Riversleigh Manor concierge backed by two beefy security officers, unsmiling in their black shades.

“Madam, I understand that you have a visitor. As you know, Inner Critics are not welcome on the premises.”

I’m not here a day and she’s gotten me in trouble already. “Yes, sir, you’re quite right, I understand. My ‘guest’ was just leaving.” I turned to Arvilla.

With a sigh, Arvilla dropped her feet to the floor and stood up. “Oh, alright! Don’t have a hissy fit. You’re just not much fun anymore, are ya, Sugar.”

I pointed toward the mirror. “Go!”

“I can’t get out that way. Where do you think we are? In a Harry Potter movie?”

The room began to vibrate and Arvilla spread her arms out to her sides. “Just wait until you have forty-three pages of stream-of-consciousness writing that you need me to edit.  You’ll come a-runnin’.”

The room filled with intense yellow light and I could see Arvilla’s arms morph into enormous bird’s wings. With a harpy’s shriek, Arvilla began flapping them. She bounded through the French doors and off the balcony. I rushed to the railing and saw Arvilla gliding up the river valley towards the mountains. Looking over her shoulder, she yelled “I’ll be baaaaack……”

“And I’ll be ready for you,” I muttered as I slammed the doors shut. 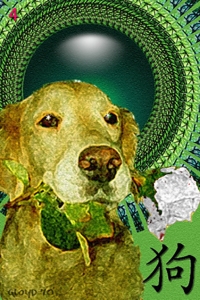 I was born in a Year of the Dog.

I am too much of a skeptic to believe in such things as astrology, but I cannot help being pleased at the ascribed characteristics of people born in “dog years”. Dogs are loyal and trustworthy. They are persistent and stubborn. You could even say dogs have a type of integrity. For the most part, you can trust a dog.

Yes, dogs are good people. I can deal with that.