I like a good treasure hunt.  Not that I’ve actually been on any real ones.   Until now I’ve been enjoying vicarious treasure hunts on shows like The Curse of Oak Island and Exhibition Unknown.  I study the clues and make my own observations and yell at the TV screen when I know the treasure hunters are on the wrong path.   I’ve only been an armchair treasure hunter until now.

I just discovered an online “game” called Geocache where participants hide little caches of goodies and mark them with GPS coordinates.   The coordinates are posted to an app with written clues on how to recognize the caches.  Then other participants use the app to find the general area of the caches and then physically go and find them.   When a cache is located, participants sign the little paper log sheet in that specific cache, log their find in the app, and return the cache to it location for the next person to find.   This needs to be discretely done so that non-participants (called “muggles”) don’t find the cache and take it– or call the police on you for acting suspiciously.

It is not as easy as it seems.   I looked for four caches this weekend and only found one.  The first one was supposed to be near a sidewalk under a “spiky tree”.   I found the tree–   which was right next to a sign that said the area was under camera surveillance.  Um, no.   The second one was in a park, but an old man was sitting on the bench were the clues said the cache would be.   He didn’t appear that he would be moving very soon, so I gave up.   The third one was in the parking lot of a post office.   I investigated for about 10 minutes until I noticed a woman watching me.  I realized how dodgy I must have appeared lurking around the grounds of a federal building.

I then took another look at the app to see if there were any more caches in the area.  Then I recognized one:  the community garden where I have volunteered for several years.  Perfect!   I knew no muggles would be around to bother me at 7:30 on a Sunday morning when I work there.   From the clues, I knew exactly where it was hidden and walked right up to it.  All this time and I never noticed this little decorated Altoid box.   In the box were a variety of detritus and garden-related trinkets.   I signed the log book and noted it on the app.   I plan to go back and add a trinket to the box too.

I know it seems silly, but it was a bit of a buzz to find it and quite satisfying too.   I figure anything that gets me out in the fresh air and moving around can’t be bad. And I can see the appeal:  it’s not the “treasure”.   It’s the hunt.

I just hope I don’t get caught by a muggle.

Here are pictures of the cache followed by a very brief informational YouTube video on Geocaching.  And the link to the website is here. 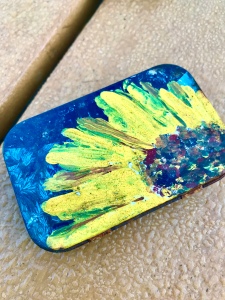